The sun in pouring in the windows to my left, facing south, and the air is mostly clear, so I can see the fields and towns of the midlands crawl under my window, a mile passing every handful of seconds.

It's odd, I've been in the mood for sharp edged dark fantasy for months now, and yet I have an unfair aversion to "the popular", which is the reason I've not read this books until now. It was the same aversion that is the reason I did not read "Sandman" until after all ten volumes were available, and why I didn't read the first Harry Potter book until the series was half done. The Kushiel book is... interesting. The mythology of the backstory strikes a cord with me, stories of willful angels have always touched me. And there are scenes and beats in the unfolding story that do whet and sometimes satisfy that in me that I was looking to dark fantasy in the first place. Not to rave completely about the writing, it is more than a little inflated, with a lot of repetition. Do we really need a description of the tradition of the design of a temple of Elua every time someone goes there?

I don't devour fiction the way I used to. Instead of one huge high-speed-reading gulp, and then the critical analysis weeks later, if at all, I tend to read fiction in sips, half a chapter at a time, and ponder it between sessions. But then, the conceptual and descriptive density of my pleasure reading is significantly higher than what I would read in my tweens. I'm very lucky to live in an era where there is stuff to read that is the kind of stuff I like to read. Older critics may still sneer the word "genre", but just like the geeks have all but won the game in the other spheres of society, we've all but won in this one as well.


This has been quite a trip, two and a half weeks. My position has been logged by BrightKite, which feeds Twitter, which feeds here to my blog. Flying from Washington DC for a gig there, then driving down to Charlottesville for the OpenSQLCamp, then taking the train up to NYC and then to Long Island, for a gig writing custom code for a really neat IP telephony service, then the train again to Baltimore to spend the weekend and some days visiting

gipsieee, while working on a remote gig. And now flying to SLC for a Thanksgiving Feast hosted my sister

wychhurst. I paid for the train tickets out of my own pocket, being careful never to cost the company more , and usually far less, than just having them fly me home for each weekend and remote gig.

I wish I could have gone to the IETF in Minneapolis last week, since OAuth Core is on track to become an Internet RFC, and so the committee for it met there. I think the next IETF meeting is going to be in San Francisco, and I will make a stronger effort to be there for it.


I have only a few gigs left, two of them I will do remotely from home in Seattle, and one of them on-site in Boston, and then I will be done with this interesting arc of my working experience. Well, and the reports. This job has homework. I am over a half dozen expense reports behind, plus I have a critically overdue engagement summary, which I am planning on forcing the finish out of my fingertips and into my keyboard during this thanksgiving break.


I have high hopes for my next job. The spot is there for me in this new department in Sun. My new manager wants me in it and working ASAP. Its for a project to build something that I have wanted to build for months, years, decades even, depending on which point I start counting from. It was the same hope (quickly dashed) that was part of my reason for going to work at several of my past jobs. This time the pieces are better aligned, and all I have to do is work hard enough, fast enough, and be persuisive enough at the right places, to be part of it.

Of course, the black heart of the shining cloud here can be seen by searching on "stock:JAVA". But, on the other hand, an economic downturn is the best time to build something new.

The gig I spent in New York, I spent writing a handful of MySQL UDFs. User Defined Functions are written in C, and link into the server binary, and are about as equally performant as the built in native functions.

The UDFs I wrote there take some parameters, marshall them in a way specific to that particular application, and then pass the packed data to the connectionless sendmsg() system call, sending it as a UDP/IP packet. The most interesting part of the actual development process for me was learning the new IPv6 friendly getaddrinfo() APIs.

But the problem solved seems generic enough, I've started a set of UDFs to solve this problem in a generic manner. Pass it a hostname, port number, and piece-of-data, and it will send that piece of data to that host's UDP port.

The only part of the design I'm sticking on, is I don't want to have to call getaddrinfo() every single time around the call loop if I don't have to, as it causes a memory alloc and dealloc each time, and might cause a DNS lookup.

Maybe I will design the function by polymorphic, and either take a hostname and port, or else take a packed struct addr and htoi portnum, and write another function to create the packed address chunk.

So my little brother is escavating shelves and storage in my parents house, and he comes up the stairs, holding a magazine he found between two boxes.

"Here. I believe this is yours."

There are no email addresses or URLs inside. No computer games. The comic pages are a classic Phil and Dixie Whats New (the one where the dragon and Dixie swap minds), and Wormy.
The Ecology of the Treant. An ad for Star Fleet Battles from Task Force Games. Book reviews for the newly published "Code of the Lifemaker", the finally unabridged "The Unteleported Man", and "The Worthing Chronicle". 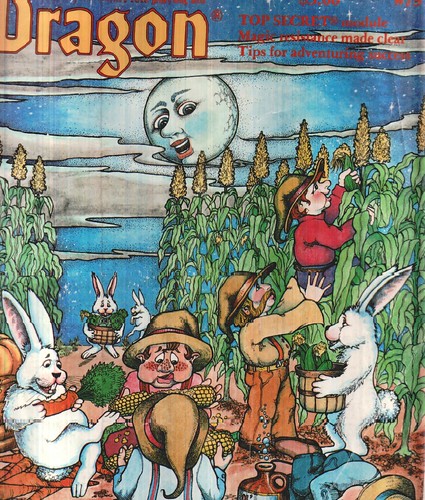