I've been recently called out that I havn't been posting so much about my actual life, instead just posting snarks and brightkite location updates. And it's a fair accusation I often encounter something that I think "I need to post that", and it doesn't happen.

As I type this, it's Sunday afternoon, I'm sitting in a church in San Francisco, listening to

clymerchick reherse singing in her choir. I'm spending the day in this city with her and my sister, after spending most all of last week in Cupertino at the MySQL office for the Professional Services AMER Team Meeting.

The activity before this was eating a delicious brunch buffett at the Sir Francis Drake Hotel watching the "Sunday's A Drag" show. The invitation to that was through Jett and Lisa working on the Cinderella puppet show, which will be reprised this winter in that hotel.

I seem to never be able to do one of these trips without leaving something behind. This time, I left some clothes hanging up in the closet in the hotel. They will be shipping them back to my home in Seattle. Maybe if I do this enough times, I will stop forgetting stuff...

The PS team meeting was mostly productive, and it was good to hang out with and socialize with all the other PS guys, trade tips about dealing with clients, and receive Wisdom From On High. Most of the sessions were about how to support version 5.1 (which will GA any day now (no, really!)). There were also good presentations about the Sphinx Full Text Search package, and about the performance of various brands of Solid State Drives.

Now it's Sunday night, I'm sitting on a United TED flight, on my was to Las Vegas, to do a weeklong gig for a client there.

I misjudged how slow the BART is, and I had to run thru the airport, trying to find a TSA security checkpoint that was actaully open, and then run again to find my gate. Departure was at 7:15, I got there at 7:13. I could see my plane out the window, but the door to the jetway was closed, and there was no agent at the kiosk. What to do? I walked behind the kiosk, and picked up the phone there. THAT caught someone's attention, a gate agent trotted over, took my boarding pass, and unlocked the door, while calling on her radio "I have Atwood here". I went running down the jetway, and a baggage agent was at the end, called out to me "you'll have to check that!", so we did a smooth handoff, me dropping the handle of my dragbehind in his hand, while he handed me a claim check. Crud, I hate having to pick up checked luggage.

The door actually literally closed behind me as I stepped aboard.

Being a United flight, there was no power plug.

Fortunately, SFO->LAS is a short flight, only 1:45. I spent most of it rereading the API for Rackspace's S3 competition, and then chatting with the guy seated next to me. He was on his way to Vegas for a SAP conference. 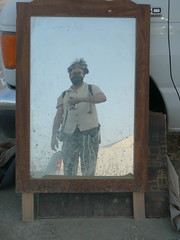