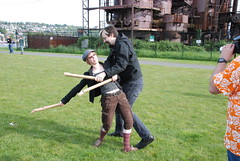 Cardboard Fight Club
Originally uploaded by krow
After the main Cardboard Tube Fight tourney, there was a freestyle. Helen and I went after each other with two half-tubes each.

There are now public security cameras at my local public park.

There is much hubbing and bubbing about privacy, erasure, recording, when the feed can be used in court, etc.

The cameras are "live" and can be pointed and zoomed by their controllers.

The current doctrine is that the video gets deleted after 2 weeks, and requires a court order or warrent to be used.

All of these "public" cameras should be read accessed by "the public" in real time, all the time. I should be able to go to a seattle.gov URL and look thru them all.

Since these cameras can be pointed and zoomed by the controlling cops, that would be a great check on said cops "professionalism" (cough). I.E, if they are always pointing and zooming in on passing pretty girls, we would all like to know about the cops doing that sooner, not later.

Whenever you walk into a store or bank or office building, you're being recorded by privately owned cameras. The publicly owned cameras should be just that, public.

It's only a few years away that most anyone can record video full time from their phone, car, and lapel pin. And a few years after that, most everyone not only can, but will.

Get used to it now.
Collapse