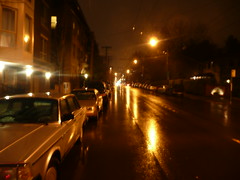 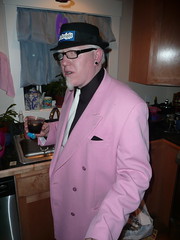 Continuing the tradition of feeling blah while keeping up the outside (mostly).


After posting yesterday, I slowly slogged thru more paperwork and receipts. My employer has send out emails requesting that all outstanding expense reports be submitted ASAP, as they refine their books for the upcoming merger. And I'm all for that, given how much all the hotel and car rentals and food-on-the-road has cost for the last several trips.

Let's see if they pay it as fast as they're asking us to file it.

krow at the airport, I parked and found the lost&found. Only to find that it's open only during regular office hours. Grrrg! So I'm not going to be able to move Sol's stuff until at least Monday, for the lack of the key to his storage, which is on a keyring, in that suitcase.

I did finally go to the gym, doing a nice heavy chest and arms set, and a set of low abs.

My dad called. I think it's one of his goals / habits to form, to call each of his kids each week.

I went to Kelly&Stephanie's party, and met a couple of very interesting people, such as the guy who runs most of the raves in Seattle, the product manager of UtiliKilts, and an interesting guy named "Duckie D Albino", who is the guy with the pink skin, white hair, and in the pink suit in yesterday's Project365 photo.

Again, spent the night fighting my cats for pillow rights. This is getting old.

Today, even more low energy. I had told Helen that I would clean her apt for her while she was gone, since seemed pretty fair given that she's been dealing with my cats while I've been gone. And I realized that I have stuff to do Monday night and Tuesday night, and that she will be back Wednesday, so today is the day to do that.

So I'm over at her place, and have straightened and put away most all the stuff, and gathered up all the dirty laundry and dirty dishes, which I will run thru the appropriate machines at my house.
Collapse