Writing from the air, and a great seat

Writing this in the air. I was going to depart for Dallas at 4pm, but as I got to the gate, the earlier flight was loading. I asked the gate agent if there was a seat, and there was. I may have discovered my favorite seat on a 757. A10, exit row, right behind the door. There isn't a seat in front of me, so there is room for my legs, and there is a power jack for me to plug in my brand new Apple in-flight power adapter.

Migrating to the Mac

This is a big step for me, computer wise. This trip, over a week long, I'm leaving behind my Thinkpad, and just carrying the MacBook. Of course, I've left the ThinkPad running and wired in on my desk at home, and also a fresh rsync of it is in the NLSU2/MyBook, so if there is anything on it I really need to get to, I can access it online. Friday night,

omahas showed me some of how to get done what I want to do with it. The really hardest part for me, is that I'm not doing most of my casual text editing (such as for this email), in emacs.

All the time I've known Helen, she has carried around a Moleskine notebook, and she writes in it after she eats. Today she showed me her notation, and we both bought new blanks at the bookstore, and I'm starting the same logging. It's not a journal, just a log of events. Food, sleep, illnesses, headache, travel, and other stuff.

It's been observed, mostly recently in a very good essay by Charlie Stross, that in the not too distant future, it's going to be doable and then easy to have a 24x7 video/audio/location recording of our life. That's all very neat, but the distillation tools for that datastream are going to be the really interesting part. The software that takes all that raw recorded video, and can digest it down to an event log of where I went, what I ate, what I did, who I met, and how I felt, that is going to be both even more important, and much more challenging to get right.

MontyW as a guest, and the BDB storage engine

MontyW and his wife have been staying at the house. SItting and hacking with him on MySQL is very educational and productive. I quickly realized that when I hit a wall, I only needed to study it enough to ask a well formed question, and he could quickly answer it, and show me code and examples. It was with his help that I was able to quickly finish my most recent MySQL storage engine task, reactivating the BerkeleyDB storage engine. (Since the code copyright is partially SleepyCat's, and because it's GPLed, we (MySQL Inc) have to release it, so look for it online, soonish.)

Saturday night I was Helen's plusone for the Amazon Holiday Party. Yes, on January 26th. Talk about frugal. I presume they got a good rate on the venue, the EMP/SFM. Anyway, it was HUGE, very crowded. There was live music going on in the main stage, some by various Real Musicians, but it was literally a crushing crowd. We instead circulated some, met a handful of her coworkers from her team, and some other Canadian Amazonians, and looked at some of the museum exhibits. More stuff had been added to the SFM since the last time I was there, for Holiday Party for Digeo, a couple of years ago. We did that for a bit, then returned to the house to soak in the hottub, along with several other people who were there for Christine's White Elephant Party.

Oh, and by the way, Helen's outfit was stunning.

Being Sick This Month

It's been a month of being sick. I think I've had 3 or 4 different bad colds, including one that I brought back from the MySQL meeting, which isn't the same one as the one I had while I was at that meeting. A significant fraction of the company was sick with bronchitis the week after that. If I had had to fly yesterday or the day before, it would have been agony for my sinuses. Fortunately, today, it's all mostly drained and dried, and all I have is the occational cough. Of course, I could now very well catch something else from one of the 300 peope I'm sharing this tin can with.

Seattle SF Film. WIll miss it.

I noticed yesterday that the posters for the 3rd Seattle Science Fiction FIlm Festival are up. This will be the 3rd one, I've been to the last two, and will have to miss this one, as I'll be at the SGFOO conference that day. 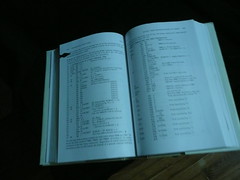