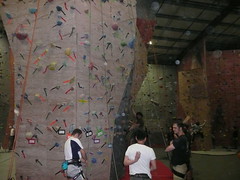 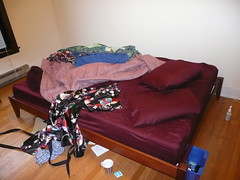 Bleah, not the best of days.

My car got towed again. Again, my fault. I parked next to a construction site (one of the many in this neighborhood). The last N times, there was no problem. This time, they brought in some heavy machinery, and it was in the way.

I got a call from my boss. I need to be in Minnesota on Monday morning for a two day gig. This is a task that had been on my calendar, then turned into "pending", and then vanished, and then today returned.

On a similar note, I'm already a day behind on the current gig, because my scheduler messed up the calendar and notifier. Not really her fault, my employer's internal business processes are some of the most high friction and messed up that I've ever experienced.

Because of all that, I had to cancel doing a favor for a friend, helping her take her cat to the vet. It's something that is very high stress for her, and I'm sorry I wasn't able to help.

I do have a commitment to Bethieee and to my other housemates to haul the rest of Sol's stuff from his room to his storage, stuff that he didn't move himself, because he ran out of time and energy before he left for Mexico last month. That's going to take a huge chunk of the weekend that I would rather not.

I'd rather spend it on, say, the Bondage Kinetics workshop that I had been invited to. But now can't fit in.

And my employer is being sticky about me living for the month of February in Hawaii. They've asked me to hold off on that until after the All Company Meeting. Which is the middle week of January. Asking me to hold off spending a month somewhere until two weeks before that month is pretty sticky.

They were apparently hoping to travel me a lot that month, and not even for storage engine work, but to shadow normal DBA PS troubleshooting gigs. I have less than zero desire to be a normal DBA troubleshooter. That's right down there with being a software tester again.

Project365 has been a dud so far today. I was originally going to photo the cat at the vet, but wasn't there for that. And then I was going to photo the car at the impound lot, and while I was there, it completely slipped my mind. I will have to shoot something tonight instead.

I finally got my smartphone syncing. Someone in RedHat/Fedora farked up the handling of Treos, and so I've not been able to sync it to the Thinkpad. Today I bought and installed TheMissingSync on the work MacBook, and then worked thru the frustration of making all that work, over bluetooth and/or USB. Having to reboot both my phone and my mac to get it finally working made me want to reach thru the ether, find a programmer at Palm and one at Apple, and proceed to beat them to death with their own keyboards.

And while I'm whining about work related stuff, my scheduler called me to let me know that our mutual boss had, well, to back up, our business processes are in an internal company MediaWiki. And the instructions on how to submit a gig timesheet were unclear and contradictory. I had got the howto from her, and what she said to do was something else entirely. So I reminded her that wiki's were made to be fixed. So she fixed it, and then our boss repremanded her, and undid her fix, so now it's wrong again. Words cannot express how much that makes my mind itch.
Collapse