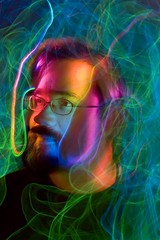 Mark Atwood
Originally uploaded by juliancash
Julian Cash, an amazing photographer, artist, and connector of cool people, took this Edible Light photo of me at FOOcamp 2007.

The Day the Earth Stood Still is a classic of the genre. This is an overused term, but in this case it's true.

Many parts of the movie that feel formula today, originated here. And were better done here than in any of it's successors.

While on one hand, it is a 50's SF B movie, on the other hand, it's actually reasonably well written, well directed, and well acted.

I couldn't help but feel that the a couple of the scenes were shot just to put into the trailer, as formulaic images of a 50s monster movie. (The Pretty Woman falling back screaming as the Monster and his Shadow Looms. The pretty woman carried unconscious by the monster to a Uncertain Fate. etc). But ignore those bits.

Also, unusual for a movie, it improves on it's source material. I've read the original short story, "Farewell to the Master". The original story had elements of transhumanism and AI oversight that were never again properly mined for another generation, and were mostly only implied in the movie. However, the story was also clunky, hookey, and was in almost all respects an good example of the published SF writing at the time (e.g., not really all that good).

And now that I've praised the movie, there are several flaws.

This is the canonical original well-known First Contact SF story. One would think that Klaatu's organization had done the "First Contact with the Warning" mission many times before. And yet they utterly flubbed it this time.

Despite stating that they had been listening to Earth radio for years, and despite demonstrating that they had sufficient information processing power, analytic abilities, and effector capabilities to both map and manipulate every electric power circuit on the planet, and to reknit a human body, they didn't use that analytic ability to understand Earth politics at all.

In 1951, the frailty and at-the-edge-ness of Earth politics and the US military would have been clearly discernible. The fact that it was frail and becoming very very fraught, was, in fact, the reason he was there. And yet he flubbed it.

He was far far too insistent on a general assembly of all the heads of state. And dismissed the UN General Assembly, not because it didn't consist of heads of state, but because not every single nation was in the UN in 1951. While that may have been true, even by then, the ones that were not, really didn't matter, especially for the purpose of his mission. Everyone in or about to be in the Nuclear Club, and/or with the ability to pursue space or advanced physics, were in it.

Plus, calling the meeting would have been unnecessary. All he would have had to do was to speak, especially at any place accessible to the world press, and every single word would have been followed by the very close and personal attention of every advanced government in the world. Especially since he didn't need a dialog, he just needed to make an announcement.

I suspect that this failure of imagination on the part of the writers is from the fact that in 1951, people had not really quite fully realized just how electronic communications had shrunk the world, how mass broadcasting had replaced in-the-flesh public speaking.

It also suffered from the flaw that afflict most SF up until the New Wave, in that it excessively valorized the worldwide caste of scientists, and assumed and indirectly stated that they would be free from the political squabbles that were paralyzing the national governments. Right....

If Klaatu had, instead of shutting down power systems, commandeers the broadcast radio networks worldwide for 5 minutes, he would have been orders of magnitude more effective, and much safer.

That Pixar's latest film Ratatouille is excellent is unsurprising. It's from Pixar. Directed by Brad Bird. It measures up and again surpasses the standard to be expected from that pedigree.

You want to go see this movie. If you've not seen it yet, plug it's name into the search bar of your browser and buy the tickets.

How great is this movie? I dislike both zucchini and eggplant, and can do without bellpeppers, and yet now I want a bite of the eponymous provençal dish. And the scene when the food critic character Anton Ego takes his first bite brought tears to my eyes.

(And the resulting review he writes is pure poetry, and should be read and reread by all realworld art and venue critics everywhere, present and future.)


Leading the movie was, of course, another Pixar short film. This one, Lifted, while funny and cute, I don't think was as good as their previous two, For the Birds and Boundin'. Also leading the movie was the teaser trailer for the next Pixar movie, WALL-E. I have high hopes.

Also leading the movie was the the trailer for Bee Movie. The contrast between Pixar and Dreamworks keeps getting wider. Pixar makes masterworks that are also popular. Dreamworks throws money at renderfarms, don't push the technology, and buys Big Name Stars to make films that will be forgotten a year later and won't make any sense at all a generation later.
Collapse