Today after piano, I went to the Century Ballroom to watch Sol and Adrienne's classes in Tango. It was followed by an open floor tango. Apparently, that happens every week, but this time, most everyone was in costume. It was much fun to watch the details of beginning to very advanced tango, the leads, touches, and motions. An odd but fun way to pass a Halloween, watching tango.

My costume this year, worn at various seasonal parties, consists mainly of my black cloak, and a "faceless" cowl. It's very interesting to see how people react to me when I literally don't have a face. And it's remarkably liberating to wear a mask. I don't have to spend the energy to manage my affect. (Plus it really adds to my "loom factor".)


This afternoon I set out to finally get WPA working on my laptop. Still not there, but the discovery of MadWifi probably means I've almost got it. But in the process of doing that, I accidentally read and grok'ed the docs to udev. Most of the most oddly useful geek/tech stuff I've learned I learned that way, learning by accident while searching for something else.

And while learning that, I also learned something I tried and failed to learn a few months ago, how Fedora does (and fails to do) DCIM digital camera filesytem importing. Now I can hook a better process in place for when I next pull the pictures out of my camera.

I was given a pair of bowling shoes a few weeks ago, and irregularly have started going bowling with a bunch of

krow's friends on Monday nights. (It's stupidly cheap, no need to rent a locker or shoes, and after 9pm.) I'm probably actually going to get my own bowling ball, of all things. Apparantly, if one knows right were to go, one can get one again stupidly cheap, and sized exactly for my hand.

This coming Sunday is a piano salon. Mr Henry throws one several times a year. It's not a recital, in that there is no "audience". Everyone who comes, plays. My performance pieces are the Bach "Minuet in G Major" and the "Minuet in G Minor". Nothing like looming threat of actual performance to sharpen the focus.

And speaking of "performance", I have a couple of opportunities to give public "performances" about the development project I've set for myself. So in addition to possibly being a stepping stone to neat well-paid gigs, it may put me in front of an audience. I don't think I've stood in front of an audience bigger than a conference room since the last time I stood at the podium in an LDS meetinghouse.

My house is less than three weeks away from getting a hottub! The concrete pad is scheduled to be poured this coming weekend. 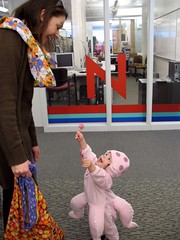 My sister and my niece. This is one of the best kid costumes I've ever seen.

A LibraryThing for collections of "other stuff". Squirl.